I’m not complaining, but I think it’s worth telling you I work very hard. In fact, my schedule is such that I would be lost if I didn’t know where I needed to be practically every minute of the day.

Why am I telling you this? Well, the lack of time I have means I need those “girly” tools that work quickly and efficiently so I look like a human being. My makeup routine takes no time, and I know how to straighten my hair and keep it that way in just 10 minutes (even though it’s super long). Oh, and the super long hair? That’s the result of not having time to get to the salon so I can get this mane taken care of!

When I look for a product so I can spice up my image, it has to work right away and without a lot of issues. I would like to have a curling wand that does just that, and I know there are some on the market that do a really good job. But can they do it quickly without a whole lot of redo? 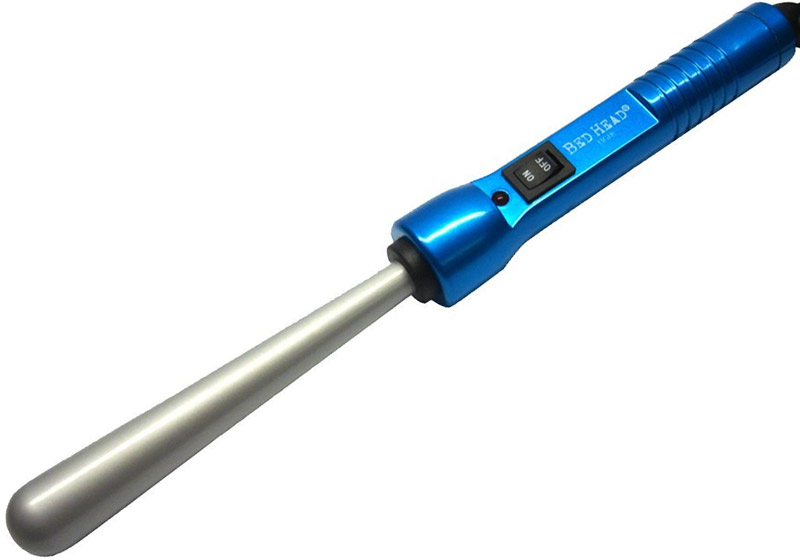 The Bed Head Blue Raspberry Conical Styler (BH311) is a different kind of curling wand to the point where I’m really intrigued. Instead of being tapered so it is thicker at the base and thinner at the top, it’s the exact opposite. It’s pretty weird looking if you ask me. It looks more like a baseball bat then a styling tool, but the appearance doesn’t matter as much as how well it works.

The upside down barrel gives you a style that is slightly different from other irons because the curls are looser at the bottom. Most irons do it the other way around and they get looser throughout the day as they fall out. The style of this iron is definitely a reversal, but it still gives you sharp curls with a lot of character.

Curls That Last and Last

This wand has staying power in fact I would go so far as to say it creates the “Energizer Bunny” of curls! They will last for days if used correctly on certain hair types. They also kind of evolve throughout the day, and the tightness of the curls yields to looser waves after some movement or exposure to the elements.

No Pain, No Curls

The rounded or “baseball bat” like end of the wand means there is really no safe place to hold on to it other than the base. That becomes a problem when you’re trying to roll the hair correctly, and it can result in a lot of burns even when you’re wearing the protective glove. The end of the wand being larger than the base makes it a little harder to control and more likely to end up on an ear or part of the neck than others, but people who are careful should not have a problem.

The awkward shape causes other problems when people try to rest the wand while they get ready to curl the next piece. It doesn’t have a rest on it, and since the entire wand is hot it’s very easy to burn a countertop in just a few minutes. The only thing I can think of that will make it more manageable would be to rest the base on the side of the sink with the hot wand lying over it. If you’re not happy with this, you can get a holster (like they use in salons).

Really? Under $25 for this? Really? It’s almost worth trying because the price is so good! I don’t like that it’s missing an auto shutoff and a few other features, but I can hardly expect a whole ton of “bells and whistles” for the price. There are a few design flaws that might not be avoidable considering the shape, but I don’t know that they are enough to make me think twice. I am so interested in the different things I can do with it that it is going to stay on my shortlist without a doubt.

I may not be the most technical minded person when it comes to curling irons, but I have tried and researched enough irons to call myself an expert in usability.

Until now, the lack of personal experience and honest reviews is what always bothered me when looking for a new iron. So, I decided to fill the gap myself.
I hope you will find all the information you need, and if I can help you save a penny or two, I will.
That's Foxy!